Kells Priory is one of the largest and most impressive Medieval monuments in Ireland and one of the largest and best preserved walled monastic sites in Europe. An Augustinian Priory founded in 1193. It is situated alongside King’s River beside the village of Kells, about 15km south of the medieval city of Kilkenny. The priory is a National Monument and is in the guardianship of the Office of Public Works. One of its most striking features is a collection of medieval tower houses spaced at intervals along and within walls which enclose a site of just over 3 acres. These give the priory the appearance more of a fortress than of a place of worship and from them comes its local name of ‘Seven Castles’. Located 2km from Kells Priory is a Round Tower Ancient Church and a Celtic high cross said to mark the grave of a 9th Century High King Niall Caille.

An outstanding Cistercian abbey founded in the second half of the 12th century. The church with its Romanesque details dates from this period. In the transept chapels the visitor can see 13th to 16th century tomb sculpture. The tower and cloister date from the 15th century. The chief delight of the Abbey is the sculptured cloister arcade with unique carvings. The Visitor Centre houses an interesting exhibition. Access for visitors with disabilities. Guided tours available.

Enjoy a guided tour of the footprints of a deserted 12th Century Medieval town dating back to 1200AD called Newtown Jerpoint. Take a step back in time and explore the standing remains of St. Nicholas’s Church which dates from the 13th-15th century, a secular stone-built tower of medieval date and the stunning Medieval Tomb of Saint Nicholas. Tradition in these parts tell that the earthly remains of St. Nicholas were secretly removed from Bari by returning crusader knights, who brought them back to Newtown Jerpoint for safe keeping. They buried those remains with all due reverence in the church that to this day bears the Saint’s name. The grave of St. Nicholas is marked by beautifully carved grave slab just outside the church, the tall figure of the Saint dominates the carving, and flanking him on both sides are the heads of the two crusader knights who brought his remains here.

Watching glass blown by hand is a most exciting spectacle! From the viewing area at the glass studio, you will see the skilled glassblowers perform their magic as they turn flowing red-hot molten glass into the beautiful Jerpoint shapes, right before your eyes. In the adjacent stone building you will find our shop and gallery where the full Jerpoint collection is available including one-off glass blown pieces and seconds available at reduced prices. In the gallery you will find glass, craft and art exhibitions throughout the year and our annual Kilkenny Arts Festival exhibition should not to be missed! Nestled in the beautiful Kilkenny countryside, the creative heart of Ireland, Jerpoint Glass Studio is an ideal destination for an enjoyable afternoon. With nearby walking trails, artisan cafes and restaurants there’s so much to do for those interested in glass, craft and beautiful scenery!

Nicholas Mosse is located in a beautiful old mill located on the River Nore in the stunning countryside of Bennettsbridge , Co. Kilkenny. Central to this experience, is our viewing windows. In our shop, visitors can watch our potters and decorators at work through glass windows; see our potters and decorators throw the shapes, fire up the kiln, glaze, paint and sponge-decorate each individual piece of Nicholas Mosse pottery by hand. A visit to the Nicholas Mosse pottery in Bennettsbridge is more than just a visit – it’s an experience – a unique one – a little piece of Ireland gone by whose tradition carries on at Nicholas Mosse.

Gáirdín an Ghorta is a National Garden of Remembrance located in Newmarket, County Kilkenny. The path through the garden is a metaphor for Irish history. The journey along the path is synonymous with the journey of the Irish people from pre-famine era to the future. An attractive garden and a place to stop and reflect – a gem not to be missed.

Kilfane Glen and Waterfall is a pristine example of a romantic era garden dating from the 1790s. Untouched for 200 years, it is a picturesque paradise with a waterfall tumbling its way to a rushing stream and woodland paths leading to a cottage. Tiny bridges sit among ancient trees, wild fox-gloves, ferns and other historically correct 18th century planting.

Designed by Jack Nicklaus, Mount Juliet golf course first opened in 1991 with a friendly match between Jack Nicklaus and Christy O’Connor Snr. Since then, the course has established itself as a premier venue for top professional and leisure golfers from around the world. Set in the rolling pastures and woodland of Ireland’s sunny South East, the course is both captivating and memorable.

Kiltorcan Raceway is one of Ireland’s best go-kart circuit’s and is known to be challenging, exhillarating and fun, while still being an extremely safe track. If you are new to go-kart racing or are an experienced driver our state of the art kart’s paired with our outdoor super smooth 1000 metre, all weather, floodlit go-kart track will offer you the buzz of a lifetime.

Woodstock Gardens are located in the south east of Kilkenny just outside the picturesque village of Inistioge. The gardens, overlooking the River Nore Valley, offer the visitor a wide variety of attractions and are a most relaxing and beautiful environment in which to spend a day. The gardens are home to a mix of formal and informal gardens with an arboretum, walled garden, terraced garden, yew walk and rose garden providing the main interest. Also of significance are two stunning avenues, the Monkey Puzzle Avenue and Noble Fir Avenue. Also of interest is a rustic summer house, constructed from materials from the gardens and a fountain to replace the original which was sold from the gardens c.1930. The arboretum is home to many fine specimen trees from Asia and South America in particular. A number of these trees are recognised as champion trees due to their size. Nearby to the Arboretum is the Walled Garden laid out with fruit trees, a vegetable garden and a beautiful herbaceous border. Just outside the Walled garden is our stunning cast iron conservatory which houses the tea shop.

History and geology blend at Dunmore Cave to give an interesting and unique situation. Consisting of a series of chambers formed over millions of years, the cave contains some of the finest calcite formations found in any Irish cave. The cave has been known to man for many centuries and is first mentioned in the 9th century Irish Triads. The most interesting reference however, comes from the Annals which tells of a Viking massacre at the cave in the year 928 A.D. Archaeological finds within the cave confirm Viking activity.

Kilkenny City the Medieval Capital of Ireland has its history dating back to the Norman era. There is a wonderful co-existence between past and present to be seen in this city with the successful preservation of its medieval past. Attractions in the city include:

Kilkenny Castle – built in 1195 and set in extensive parklands

The Smithwicks Experience – takes you on a journey through the medieval origins of brewing on the site of the St. Francis Abbey Brewery to the arrival of John Smithwick in the 1700’s, and right up to the present day.

St. Mary’s Cathedral – dominates the landscape of Kilkenny, it’s great tower being visible from all approaches to the city.

Numerous more churchs are located in the city including Saint Patricks and Saint Johns. 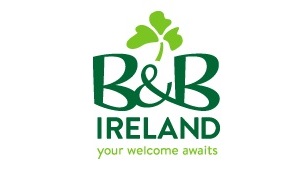 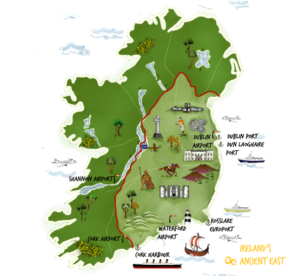 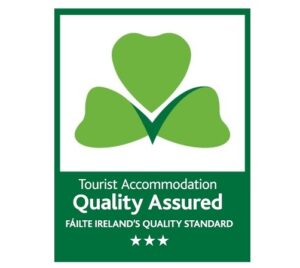 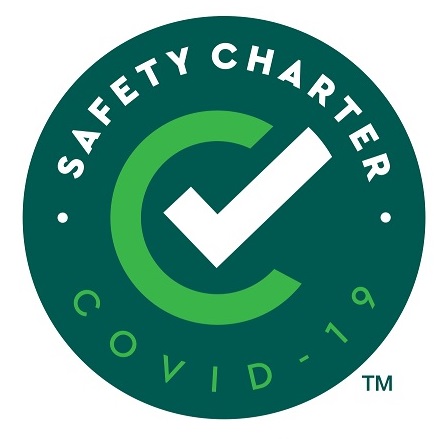